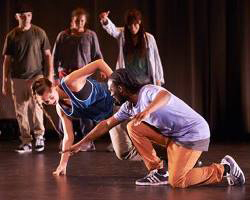 Before heading back to Montreal where they're all from, this ensemble had one more performance in Surrey. They had for a week successfully performed for a sold-out audience in Vancouver (see Roger Wayne Eberle's review below) before coming to Surrey. These kids are first generation Canadians and second generation hip-hoppers. They still have the same moves, but in a more synchronic and refined mode than the originals from New York who made hiphop a rave in the 1990s. The music they danced to is not hiphop but a melange of internationalism--from samba and rumba to hiphop and rock and roll. That's where the difference lies: Music evolutionized and synchronized into dance.

What makes this group unique is that their creativity is in constant evolution, creating new trends, and their use of the term "opportunity" is what it's all about--the opportunity to create new forms of break dancing, giving the second generation of hiphoppers who mostly composed the Surrey audience the opportunity to break into new modes of creativity.

The production aspects, other than the soundtrack, were simple--no props, just a bare stage, but it was the use of lighting, especially the window effects as the dancers did their thing individually. Crazy Smooth, the choreographer, was sweating profusely. It was like he forgot to dry himself after taking a shower every time he entered to do his moves.

I even thought there was Spanish speech in music that had a tinge of the tango, a political speech about "el pueblo". At one point, these multi-racial dancers from all parts of the world--Africa, South America, the Caribbean, Quebec--talked to each other in their languages, expressing the multi-racial and multi-cultural mosaic of these first generation Canadians.

This is the kind of music and this youth subculture of Canada has evolved into: ever-creating new sounds and new dances, making it uniquely Canadian.

The Bboyizm dance group sees dance as self-expression. Yet it is difficult to express the range of movement their hour long show encompasses. It is much more than mere dance. It is a blend of dance and narrative. Story stands out stellar among the many impressive improvisational or choreographed dances. Crazy Smooth is one of the dancers, and he is also the main choreographer. But back to story.

One of the most exceptional examples of synchronicity is a dance that Melly Mel leads. She interacts in unique and powerful ways with each of the other dancers, and as she says, “each aspect of each dancer is a unique reflection” until the end when she becomes one with the stars and sun and universe. This portrayal puts our social world into perspective by suggesting that we are each a part of everything we encounter. As Julie Rock says, we are all individuals coming together, and the dance reflects the social aspects of our group.

Another key story that reflects this is expressed creatively by NOSB who plays the bongos while individuals dance to the bongo beat between shadows in the window of light. The story is that the individual dancers are elements of NOSB’s imagination conjured up to animate the beat of the bongo.

In 1972, Billy Preston came out with a song about “a dance that ain’t got no steps,” and he went on to sing that he was going to let the music move him around. In 2014, Bboyizm offers an approach that integrates movement and musicality in as natural and seamless a manner as that lyric from Will It Go Round in Circles suggests, except that there are plenty of well-choreographed steps in a Bboyizm performance. Bboyizm is a marriage of matter and mazy motion blessed with a flurried confetti of forms whose functions are wrapped in a present that hits the future with a surprisingly explosive delivery to make you suspend belief in complete amazement and delight.

You will do yourself a disservice if you do not take in the next Bboyizm performance. This is more than dance. It is an exchange of energy wherein each dancer feeds off the others to create a dynamic synergy of movement, a dance dialectic of explosive strength and laid back flow. The show is at once linear, cyclical and episodic. It is as at times as intense as a Tesla coil, and at other times as laconic as a casual shrug; it is as potent as a purposeful pose, and as comfortable and sexy as a slow groove or that sweet old Lionel Ritchie’s easy Sunday morning.

With some dance companies, competition and one-upmanship is the driving force, but Bboyizm has as one audience member put it a “beautiful culture of support” that one seldom finds in the media today or in the contemporary sports world. Like one dancer, NOSB says, “we like to teach to challenge not to compete.” Choreographer Crazy Smooth puts it this way: “We dance not to impress, but to express ourselves.” There were points during the performance when the Bboyizm group was interpreting the rhythms of the music when the rhythm of the dance movements reached the sky. Bboyizm dance moves are stealth steps to the stars. Bboyizm has got more than street cred—they put the bravery back in bravado. Bboyizm is what might happen if Haiku were a dance: its elegance, finesse, and complete absence of wasted movement is an innovative breath of fresh air in an art form where traditional genre can sometimes stultify and enervate those who practice.

If practice is a part of the journey toward perfection, the freestyle movements of Bboyizm, within and apart from the rhythmic contact component of the dance, reveal that this troupe have perfectly elevated this journey—Bboyizm is a journey destined to perfect the audience, because it leaves you feeling so wonderful at the close of the show. It is an amazing show. Don’t miss it!