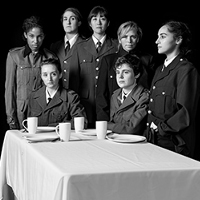 To commemorate the one-hundredth anniversary of the armistice that took place at the eleventh hour, of the eleventh day of the eleventh month of 1918, The Cultch has produced three plays that perhaps offer a deeper understanding of what war is really about. Three Winters is the third in what has been named the Ceasefire Series; though chronologically, it is second, since its setting is in Stalag Luft III—a notorious WWII POW camp near Germany’s eastern border.

What is different about this production, the first public presentation, is that all the roles: the Canadian airmen, the POWs and the German soldiers are played by women in their early twenties. While the women play men, their performances, individually and collectively, embody a feminine sensibility. Writer and director Amiel Gladstone has chosen seven actors, in part because authenticity requires that a Handley Page Halifax bomber requires a crew of seven: pilot, co-pilot, navigator, bomb aimer, radio operator and two gunners.

The storyline begins with the Halifax bomber taking off at a military airfield somewhere in England with a full crew of seven. The plane is shot down over Belgium with all but the pilot killed. The pilot (Julia Siedlanowska) is captured by German occupying forces and taken as a prisoner of war (POW).

Siedlanowska, who is the only actor to maintain the identity of a single character throughout the play, helps the other Allied POWs to put on live theatre to maintain morale, while simultaneously building a tunnel as an escape route.

Notwithstanding that the story is centred on the Canadian pilot, the play is essentially an ensemble piece. A feature emphasised by Jacqueline Firkins’ clothing the entire cast in khaki coveralls.

Adrian Muir’s set of a Stammlager base camp is appropriately austere. It includes the artful use of a long, strapped box that functions as a stage, a table and an underground tunnel. Sara Smith’s lighting and Sammie Hatch’s sound combine to accurately evoke the harsh environment of a POW camp.

Amiel Gladstone has put together a piece of theatre that fuses humour, drama and poignancy. It invites the audience, not just to appreciate how resourceful POWs needed to be, but also to observe a historical event through a different lens.