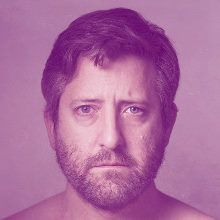 Bard on the Beach
Shylock by Mark Leiren-Young

Shylock written by the award-winning playwright, Mark Leiren-Young is about a Jewish actor, Jon Davies who finds himself condemned by his own community for his portrayal of Shakespeare's famous, avaricious Jew.

“Does not a Jew hath eyes and hands,.... if you prick us do we not bleed ? ....If we are like you in the rest, we will resemble you in that. If a Jew wrong a Christian, what is his humility? Revenge..... The villainy you teach me, I will execute, and it shall go hard but I will better the instruction.” So started a riveting monologue on the prejudice of people watching Shylock played in the character of the villain and that exploits the image of all Jews as evil and cunning. Jon Davies (Warren Kimmel) skilfully keeps your attention and makes you question your own beliefs and prejudices. He questions the idea that today in our over-sensitive audience, anything that was considered normal in the past, is condemned as encouraging racism and bigotry.

He insists that it is in fact a portrayal of Life as it was in those days and that history should be shown in all it's colours.. that it should not be tarnished by soft-hearted, hyper-sensitive people who distort the hard truths of Life. Art he argues should show the Truth in all its forms, the good, the bad and the ugly. Do we censor the 'Truth', art and the artist, just to satisfy today's soft-hearted audience? Or do we show Life as it was?

Or is it that we the audience of today do not understand the genius of Shakespeare? Some commentators have said that the character of Shylock is an example of Elizabethan (and Shakespeare's own) anti-Semitism. Others, have seen the creation of Shylock as an attack on this anti-Semitic intolerance. Shakespeare, however we forget, was a dramatist. He may not even have been concerned with either anti-nor pro-Semitism. He could be focussing on using his skill to shape individual characters so as to give a dramatic edge to the scenes. Shylock is drawn as a bold and dynamic character. Shakespeare's main aim might have been to manipulate our emotions regarding Shylock -- the audience sympathizes with him and yet loathes him the next moment. It is a reflection of Shakespeare's genius and of his ability to create distinct, unforgettable characters in his plays.

Davies moves easily from the role of the character to that of the actor. He masterfully 'strips' from one to the other. In this imaginary talk-back situation, the production of Merchant of Venice was cancelled because the media and many in the audience booed and heckled 'Shylock' (Davies) when he acted as the cruel and malicious villain that asked for revenge and a 'pound of flesh”. An imaginary Jewish professor, had a talk-back show where the actor, Davies was further humiliated; people cancelled their season's subscriptions and forced the hand of the director to cancel the production.

Jews were looked upon as lecherous money-lenders, the lowest rung of humanity in Elizabethan times and so Shylock should be portrayed as such, is what Davies emphasizes. Not as what the professor wanted-- a watered-down version of a very “human” Shylock. Davies stresses we do not have to sugar-coat the Truth and pretend it didn't happen? Are we to be so careful not to hurt people's feelings that we cover-up hard facts that though not commending the human spirit, still did take place.

When finally the whole production is cancelled, the Director promises to give Davies any other role he might like in next year's Shakespearean Ensemble. “Othello” said Davies. “Oh, not that one!” said the Director, “that can't be. Don't you know he is black?” “So what? Do you limit an actor's acting to those who have the right pigmentation of skin colour? It's acting you know,” retorts Davies.

And so it is that we are left with a bewildering amount of questions. Have we become hypersensitive? Do we eliminate all literature because of certain words like the 'N' word or derogatory terms for 'gay' people or people of colour? Do we sugar-coat and destroy the truth so as to appease the soft-hearted? Do we cancel all tragedy and make all plays end with happy afters? Or do we learn and trust the wisdom and maturity of the audience to understand Life as it was and so to appreciate more, the rights and freedoms of today?

Do we hope that seeing the past we are more aware of prejudice and unfairness today? Or will the past only cause us to become more biased and negative towards others? Do writers and artists need censorship? In the play, Davies responds to one critic’s accusation that he is a “self-hating Jew” with surprise, and he argues that theatre is supposed to be provocative.

This talk-back production is thought-provoking and intense. Go see it. It makes us examine our ideas. Time passes quickly and our minds get much to delve into, even after this amazing performance.