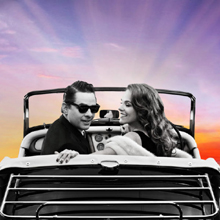 Bard on the Beach
Much Ado About Nothing

Bard on the Beach opened its 28th Shakespeare festival with one of the immortal Bard’s most entertaining comedies, Much Ado About Nothing; the first of five productions that can be seen at Vanier Park. The Winter’s Tale, The Merchant of Venice and The Two gentlemen of Verona will follow throughout the summer and then a post Labour Day presentation of Shylock by Mark Leiren-Young.

Director John Murphy has moved this overtly lavish production out of its original late sixteenth century setting to the mid twentieth century Messina, Sicily – the location of its original staging. Alas, the Vancouver weather, like much of this year’s spring, didn’t cooperate in providing Sunset Beach with a Mediterranean brand of sunshine.

Much Ado is a lighted-hearted romantic comedy about two very different pairings: Claudio (Julien Galipeau), an aspiring actor is immediately smitten by Hero, the beautiful and demure daughter of film studio executive Leonato (Andrew Wheeler). While the love-struck couple make fast plans for an elaborate wedding, Hero’s cousin Beatrice and Benedick, both seasoned actors, both harbour antipathy about marriage in general and each other in particular.

Beatrice (Amber Lewis), who carries a few foibles commonly associated to another Shakespeare heroine, Katherina from The Taming of the Shrew, appears to have only distain for Benedick (Kevin MacDonald), while he, in keeping with the ego of an established matinee idol, has little use for Beatrice’s independent nature. However, as a result of some creative meddling, the reluctant lovers are ultimately drawn to each other. At the same time, an unlikely villain, tabloid journalist Dona Johna (Laara Sadiq) who is driven by spite and jealousy, concocts falsehoods damaging Hero’s reputation, thus throwing her wedding plans into jeopardy.

John Murphy, who, in an earlier Bard on the Beach production of Much Ado assumed the role of Benedick, allows lots of fun for both audience and actors without letting it derail into pantomime. He also offers up trademark icons associated with Italy in the fifties: Gina Lollobrigida sex romps, the spaghetti-western and Lambretta scooters.

Amber Lewis is an excellent choice as Beatrice. She has terrific chemistry with Kevin MacDonald’s Benedick, and displays remarkable physical comedy in the scene that sees her eavesdropping on Hero and Ursula (Parmiss Sehat and Lois Anderson) whilst trying desperately not to be noticed. MacDonald’s lofty demeanour is a perfect foil for the feisty Beatrice. The pair’s charming tango is a second act highlight.

In the secondary roles, a be-wigged Laara Sadiq as mischief-maker Dona Johna (essentially a male role in typical productions) brings a wanton dimension to a single dimensional character. Kaitlin Williams as Hero’s wistful personal assistant Margaret shows excellent stage presence and movement.
Andrew Wheeler as Leonato is pretty solid. Though, his exaggerated anger at his daughter’s alleged indiscretion may have been appropriate in Shakespearean time, but surely not in the mid twentieth century.

Setting the play through a prism of the golden age of Italian cinema certainly offers a tenable context for the catawampus matchmaking. However, it is the intriguing screenplay of Beatrice and Benedick that keeps the play alive. Altogether, this is an immensely entertaining production of one of the Shakespeare’s most popular works.