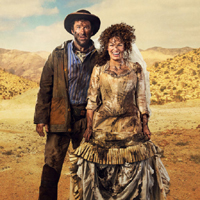 This summer’s offerings at Bard on the Beach promise the continued high quality and enjoyment that have become hallmarks of the annual event, this year celebrating its 30th anniversary. Imaginative approaches to traditional Shakespeare mark some of the plays this time around, and such is the case with the production of The Taming of the Shrew.

Inspired by Miles Potter’s 2007 production, set in a small American frontier town called Padua City in the 1870’s, with its characters still hailing from Shakespeare’s scripted Italian cities and speaking Shakespearean English, this production seems an unlikely construct. Indeed, at first, this reviewer found the mismatch disconcerting. This did not last, however, and after a few minutes, the excellence of the production had me and the entire audience in its sway. This is due, in no small measure, to Anderson’s direction. The action is lively and evenly spread on stage, carefully focused on cogently moving the story of many parts forward.

The actors in every role of this production were inspirational. Susinn McFarlen was a sharp-minded, witty, tough-negotiating Baptista Minola. Jennifer Lines (Katherine) surely inspired fiercely independent women of all generations in her performance as a lonely, wounded soul left to express herself as an angry, spiteful woman that people had come to taunt as a shrew - a label which she clearly hated. Kate Besworth (Bianca) admirably portrayed a fine foil for her sister - pretty, pampered and admired by all. Andrew McNee’s Petruchio, brash and overly confident, was a perfect match for Katherine’s tirades. His character’s manipulations, frustration, and ultimate resignation to the nature of the marriage he would have with Katherine were subtle, sensitive and realistic.

We have, besides, the entire fine cast of conspirators, suitors and their supporters, and flies in the ointment that gave the production its bright colour, rollicking action and superb flavour. Anton Lipovetsky’s comedic talent shone in his portrayal of the hapless Hortensio in his pursuit of Bianca’s love. Scott Bellis as the more serious and ruthless rival suitor, Gremio, was strong, also. Kamyar Pazandeh as Lucentio, and Chirag Naik as his servant Tranio, made a fine pair in their conspiracy to win Bianca, and Joel Wirkkunen was a truly fine Grumio, supporting Petruchio through all his ups and downs.

This production would not have reached the calibre of excellent entertainment that it achieved without the production crew. Costumes were superb. The set was adaptable and versatile, beautifully functional. Lighting was excellent, and sound effects were imaginative, often bringing surprised delight to the audience.

This production of The Taming of the Shrew is unconventional, to say the least. It is a raucous, funny, and thought-provoking rendition. The talents of all involved make it a great evening out.