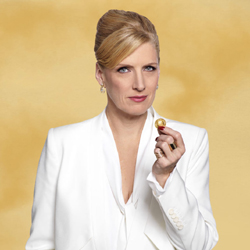 Timon of Athens by William Shakespeare

Timon of Athens is a one act play by William Shakespeare, though most likely written jointly with another author (Thomas Middleton has often been attributed with the collaboration). In this essentially all-female production, a zealously generous Athenian, much beloved through (in this mounting) her largesse and benevolence, disburses her wealth to hangers-on.

Despite the unheeded warnings of her loyal secretary Flavius (Moya O’Connell), the realization of potential (and probable) bankruptcy comes as a total shock. Even worse, and presumably, the morale of the story, she discovers that her so-called group of friends are no more than a bunch of grasping lickspittles.

Colleen Wheeler gives a fearless tour de force performance as the titular complex character, figuratively and literally tearing up the stage. Moya O’Connell provides impassioned support as Timon’s omnipresent and faithful employee, Quelemia Sparrow shows off her penchant for comedy as the fawning Ventidius and Patti Allen is very watchable as Sempronius.

Director Meg Roe makes this unusual production a memorable one; allowing smart phones, Macbooks and high heels to enhance Shakespeare. The inclusion of a female cast (save for a pair of domestic helpers) gains much and loses little from conventional versions of Timon of Athens.

Drew Facey’s bright set on a square, raised platform stage with an electronically operated descending table offers a certain elegance and modernity to this updated production. Mara Gottler’s contemporary clothing brings this morality tale into an even more relevant present day with sophisticated charm. Both elements benefit from John Webber’s aesthetic lighting. Josh Reynolds gets credit for fight direction, but the only fight I saw was Colleen Wheeler’s fight with the set – which she won hands down.

Timon of Athens is definitely not one of Shakespeare’s most popular plays, nor one of his best, but how thrilling that Bard on the Beach delights Vancouver audiences with a unique character like Timon. The prevailing theme of phoney friendships within a cynical camarilla would seem to have more conviction from a female company.