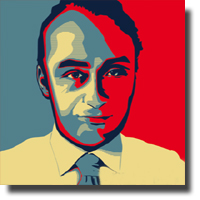 When they say "politics is dirty", it surely is. And from this "insider" play, as the playwright actually worked in the political campaigns of Charles Schumer and Howard Dean, you could see how dirty politics is not only in the USA from where this play is based, but anywhere in the world.

This is a timely look at American power and politics now that the US Presidential campaigning is going on, and what you'll see in this fast-paced play is what's happening in the US as well as the Canadian political scene.

The play was first produced by New York’s Atlantic Theatre Company in 2008. The film version,The Ides of March, starring Ryan Gosling and George Clooney, was made in 2011 and was nominated for an Academy Award.

Kudos to Director Nicky Anderton and the rest of the actors and production staff for coming up with a successful mise-en-scene.

Founded in 2009, Blank Slate Theatre Productions is dedicated to producing and mounting thought-provoking, edgy and innovative theatre at affordable prices in Vancouver and Whistler. Past productions include Canadian playwright George F. Walker’s Problem Child and the Canadian premiere of Ethan Coen’s Almost an Evening.