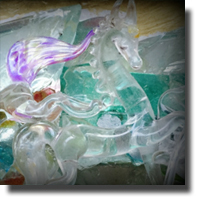 We get the first clue of the strong autobiographical element in the opening scene of Tennessee Williams’ play, The Glass Menagerie with Andrew Coghlan’s introductory narrative. Coghlan, who, in a sense is both narrator and (in the character of Tom Wingfield) protagonist, informs the audience that this is a “memory play.”

The use of Tom as storyteller emphasizes the character’s responsibility of William’s own voice, who in writing the play was influenced by his guilt from abandoning his sister Rose in a state sanatorium. It likely also accounts for his sympathetic treatment of the character of Laura Wingfield.

Director Mel Austin-Tuck deserves a lot of credit for this praiseworthy production. The handling of the sensitive candlelit scene between the gentleman caller and the fragile Laura was strangely moving, allowing Michael Germant and Gina Leon the opportunity to expand their character’s nuances.

Lynne Griffin is complex as the family matriarch Amanda. A former Southern belle, who long ago was left high and dry by her husband, she is obsessively controlling of her adult children, even to the point of smothering in the case of Laura. She is caustic, yet at the same time coquettish. One senses that Ms. Griffin’s portrayal reflects the playwright’s own mother’s unintentional astringent tendencies.

Gina Leon’s performance as the shrinking violet Laura is an almost perfect counterpoint to Lynne Griffin’s excessive role of her character’s mother. Her vulnerability and detachment is unmistakable as we witness her disappearing into her own private world playing with her collection of crystal animal figurines that gives the work its title.

Andrew Coghlan works hard to be convincing in his dual roles. He is particularly effective as the storyteller looking back on a crushing episode in his family’s life; though, perhaps less potent as a frustrated poet trapped by a sense of duty to his mother and sister.

Michael Germant as the gentleman caller acquits himself well amid the histrionics of the Wingfields. He may be the most real of the play’s characters, but he too suffers from apparent self-delusion. The lesson he offers Laura about becoming more self confident – could be good advice to anyone.

Diana Capstick-Dale’s multi-level, multi-purpose set that replicates the Wingfield living room and the outside fire escape fits the period of pre-war St. Louis but the small stage gets very crowded when all four actors are on the floor simultaneously.

The apocalyptic ending is emblematic of Tennessee Williams’ anecdotal style – evidential that for many, life is over before its natural end.