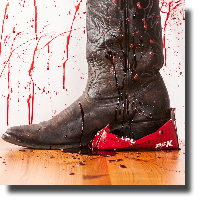 When you have a Pulitzer-winning playwright, Tracy Letts, and the right actors, all local talents--Sebastien Archibald, Ted Cole, Meghan Chenosky, Emma Slipp and Colby Wilson-- and of a course, a Jesse award-wining director (Chelsea Haberlin), you can't go wrong. And that's how the audience felt last opening night, in this intimate theatre ambience, inside a trailer (max. cap. 37), as we watched mano a mano this suspense thriller.

The play follows the Smith family, a clan of trailer-trash Texans who hatch a plan to murder their estranged, alcoholic matriarch to cash in on her insurance policy. Unable to do it themselves, they hire Killer Joe Cooper (Colby Wilson), a full-time cop, part-time contract killer. Once he steps into the trailer, their simple plan quickly spirals out of control.

Wilson's threatening presence exudes fear in this claustrophobic atmosphere, and we get that Pinteresqe feeling that privacy is being invaded, as he takes control of the whole family. The violent scene with Sharla (Emma Slipp) where he forces her to do oral sex in front of her husband (Ted Cole) was powerful. Cole, by the way, reminds me of a young Kris Kristoferson.

Archibald played his part well as the sleazy, delinquent son who plans the murder. The nude scenes with both Slipp and Chenosky were directed tactfully by Haberlin, and and fight scenes were done extremely well as well as the lighting effects by Lauchin Johnston. You'd almost think you'd get hit by chairs and flying objects in this intimate ambience. There's also a warning in this show: "Leave the kids at home", obviously because of the violence and sex.

This is the second of ITSAZOO's Premiere Series which presents site-specific debut works by renowned playwrights. Haberlin says that this is theatre for the Tarantino crowd and she welcomes "artistic risk-takers" to the trailer park.