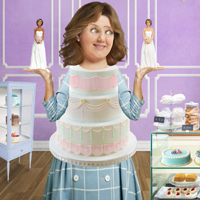 Set in current times in Winston-Salem, North Carolina, playwright Bekah Brunstetter’s birthplace, The Cake starts out as a comedy, but at some point shifts gears and becomes a drama. The play's narrative structure borrows from a reported real life incident in 2015 in Lakewood, Colorado, when a bakery declined an order to provide a wedding cake to a gay couple due to the baker’s religious convictions.

Della is dedicated to her craft of baking “cakes for all occasions.” She truly believes that any problem could be solved with one of her cakes that she claims contains the all important ingredient of love. Della and her husband Tim are a childless couple with conservative Christian values. So when Jen, whose mother was a close friend of Della, shows up to ask the cake shop proprietor to cater her wedding cake, it leaves our ‘cake lady’ with a decision that she would prefer not to make. While there is a special fondness between Della and Jen, it doesn’t help that Jen’s fiancée Macy is a fiercely combative lesbian.

As played by Erla Faye Forsyth, Della comes out as the most sympathetic character in the play. She is not an intentional bigot and is obviously conflicted by her deep-rooted opposition to same sex marriage. Even as she prepares to compete on CBS television’s “The Great American Baking Show” her doubts inhibit her confidence with both her vocation and her marriage.

Stephanie Elgersma turns in a stellar performance as the equally sexually ambiguous Jen. She handles the play’s most poignant – and perhaps most disturbing moment in retelling her earliest experience of heterosexual intercourse. Cecilly Day might have the toughest role as Jen’s belligerent partner Macy. She takes no prisoners nor does she try to draw sympathy from the audience.

Director Angela Konrad just manages to keep the humour on even keel with the play’s more serious counterpoints without ever resorting to moralizing. Michael K. Hewitt’s clever use of pastel lighting separates Della's real world from her illusions of competing on a television reality show.

In The Cake, Bekah Brunstetter deliberately depicts her characters with varying degrees of personal confusion and contradistinction over sexuality - likely a microcosm of the population at large.