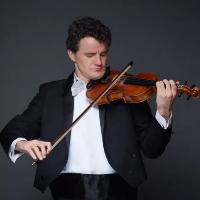 Hearing the VSO was like listening to the calm sound of raindrops falling on placid waters.

Associate Conductor Andrew Crust guided the VSO with an assured hand. An up and coming conductor he is music director of the Lima Symphony, has collaborated with numerous artists including Amit Peled, Awadagin Pratt and Laquita Mitchell.
In 2023, Maestro. Crust will lead performances of Le nozze di Figaro in several cities around Spain. He has also conducted with the Winnipeg Symphony, Memphis Symphony, Hartford Symphony, Bozeman Symphony and l’Orchestre de la Francophonie in Québec and won the 2020 Solti Foundation US Career Assistance Award and the 2021 Prémio a la Proyección at the Llíria City of Music International Conducting Competition.

Canadian violinist Timothy Steeves brought a melodious ambience to the evening performance. He has performed in North America and Europe as a soloist and chamber musician at a diverse range of musical hallmarks including Carnegie Hall, the Kennedy Center, Lincoln Center, and the Salzburger Festspiele as well as performing on BBC Radio, NPR, and Radio Canada.

Steeves is Associate Concertmaster of the Vancouver Symphony Orchestra and holds the distinction of being the founding violinist of the new music ensemble Latitude 49.

Among his honors are the Lieutenant Governor of Alberta Emerging Artist Award and a Laureate of the 2015 Canada Council Musical Instrument Bank Competition as well as earning a Doctor of Musical Arts from Rice University.

The musicians of the VSO performed beautifully. The VSO was founded in 1919 and remains the 3rd largest orchestra in Canada. The VSO performs widely each year throughout British Columbia and has toured in the United States and Asia. Many are unaware that the VSO is a recipient of both Grammy and Juno awards.