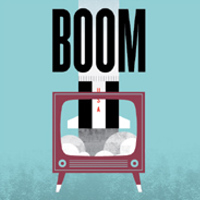 BOOM, created and performed by Rick Miller, is a kaleidoscope account of a period of turbulent change in North America and Europe, starting with the end of World War II and ending with Woodstock and the Apollo manned moon landing. In his one-man-show, Miller covers every year in chronological order from 1945 to 1969. But Miller is a performance artist rather than a documentarian, so, the show is at its best when Miller marries trademark songs to a particular time and place.

When taking us on a nostalgic visual and aural trip through the baby boom era (an era he doesn’t personally belong to) he advances the narrative through three baby boomers: his mother Madeline from Cobourg, Ontario, Lawrence Davis, an American draft dodger and Rudi, an Austrian immigrant, who once lived in the post-war American zone in Vienna.

Aside from being a decent singer and versatile all round performer, Miller is also a skilled mimic. He manages to deliver accurate impersonation of political figures from Winston Churchill to Martin Luther King and cultural icons from Jerry Lee Lewis to Janis Joplin. One had to like his take on Barry McGuire’s "Eve of Destruction" from the protest song epoch in the mid sixties. He ended the show with a poignant rendition of David Bowie’s “Space Oddity.” While his impersonation of Bowie was not especially exact, the accompanied space-walk was certainly compelling.

Yannik Larivee’s set has the look of a giant time capsule, having a curved column reaching from a circular inclined platform up to the stage’s superstructure. Archival images and video, some with the artist himself inserted, are projected onto the curved surface of the column as well as the sloped platform. Unfortunately, this was a problem for audience patrons seated in the first few rows over to the sides of the auditorium, since they got a distorted view of images.

Even after a spell-binding two-hour show, Rick Miller still had energy in reserve for a post-show talk on how the show was developed. Most of the audience stayed behind to take part.

I was keen to see BOOM, having been to one of Rick Miller’s previous productions, MacHomer, a hilarious mash-up of pop culture and serious theatre that the artist describes as “the Simpsons do Shakespeare.” In that production, Miller did all the voices of the Simpsons characters subbing for the various roles in MacBeth.

In BOOM, his purpose is to highlight the era of the baby boomers from 1945 to 1969 through the stories of three people: his mum, Donna, who grew up in Cobourg, Ontario; Lawrence, a Black draft dodger from Chicago, who was his mum’s one-time lover at the University of Toronto; and the man his mum would later marry – Rudi, an immigrant from Vienna. Their life stories are interwoven with the great events and trends of the times – political, cultural, and technological – that the baby boomers were profoundly influenced by and helped shape.

The vehicle for the show is a large cylinder in the middle of the stage that serves a dual purpose – a screen on which images and video clips are projected, and a translucent barrier behind which he makes his almost instant costume changes followed by brief musical performances and excerpts from famous political speeches in silhouette. Music is an integral part of the show; indeed it was the soundtrack for the era itself. The volume on a few of the vocals is a little low, and not all the impersonations are spot on, but he really nails Mick Jagger and Pierre Trudeau.

The show proceeds in chronological order from the bombs dropped on Hiroshima and Nagasaki to the inauguration of the Cold War, the splitting of Germany, the civil war in China, the secession of Pakistan from India, birth of apartheid, and the conflict between Palestinians and Jews at the creation of Israel.

The show covers so much history one cannot do it justice. The immediate postwar explosion in babies, Korean War, suburbanization, automobile culture, TV, McCarthyism, the birth of rock n’ roll, civil rights, Elvis, and Sputnik are just a few of the highlights. While assuming a global context, the content is largely American, but many of the same trends spilled over into Canada, and he covers some uniquely Canadian events and issues.

Of course, the ‘60s were even more tumultuous, with the assassination of Martin Luther King and the Kennedy brothers, the escalation of the Vietnam War, the urban riots and the Black Power movement, not to mention the youth rebellion/ counterculture. An integral part of the decade was also the U.S. space program, accelerated beginning with Kennedy’s declaration that the U.S. would put a man on the moon by the end of the decade.

The show ended with that event in 1969, with the artist being conceived on the day the moon shot was launched. The show fittingly ends, given his recent passing, with David Bowie’s “Space Oddity.” All in all a spectacular show!