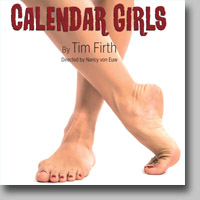 It was an entertaining opening night and the audience laughed all throughout the play. My favourite part was the closing scene of Act I when all the girls posed nude as a group and Marie (Kathleen Driscoll) and Lady Cravenshire (Sue Sparlin) come into the room and see them.

All the calendar girls enjoyed themselves playing their roles, and it seemed like the actors had fun which in turn got the audience having fun too. I'd say Sparlin stood out, and she got laughs for every bit of acting she did, especially in the scene when she shows the slides of James Bond and Broccoli. But I also was delighted by the versatility of Jared Arthur who plays two contrasting roles: the timid photographer who takes the picture of the girls for the calendar in the first act, and as the artsy-fartsy director of the commercial in the second act.

The plot is about John (Gavin LeClaire), the husband of Annie (Nancy Ebert). He dies of leukaemia, and she and her best friend Chris (Carol L. Mann) resolve to raise money for a new settee in the local hospital waiting room. They manage to persuade four fellow WI members (Elaine Francis, Joan Koebel, Emma Greenhaigh and Beverley Field) to pose nude with them for an 'alternative' calendar, with a little help from hospital porter and amateur photographer Lawrence (Jared Arthur). The calendar is a success, but Chris and Annie’s friendship is put to the test under the strain of their new-found fame.

Kudos to director Nancy von Euw for a well-directed and fast-paced mise-en-scene, and to the production staff of Vagabond Players for coming up with this delightful show.