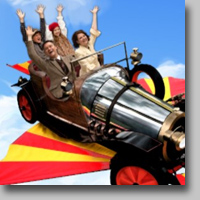 This was a delightful show about a car that flies, although due to stage limitations, the car was just raised a few feet above the stage. Based on a film in the 1960s starring Dick Van Dyke, this show was adapted into a stage musical.

Naturally, as a film, there are more opportunities to see a car flying through the air and over the seas, especially now with high tech graphics. But the musical was done well, especially with the likes of professional singers/actors Kevin Michael Cripps(Les Miserables), as Caractacus Potts; Ranae Miller (Shrek the Musical), as Truly Scrumptious; Robin Sukorokoff (The Addams Family), as Crazy Grandpa; Jamie MacLean (Les Miserables) as Jemima; Dawson Vogt (Chitty Chitty Bang Bang) as Jeremy, Mark Turpin (Oklahoma), as Baron Bumburst, and Katie Purych (The Addams Family) as the Baroness.

The show is directed by Chad Matchette. Brent Hughes is the Musical Director, with the live orchestra at the orchestra pit, and Melissa Assalone as the choreographer.

Kudos to the more than 40 actors and dancers, as well as the production staff for an entertaining show.