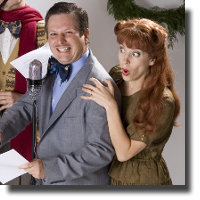 Midnight Theatre Collective
Christmas on the Air By Lucia Frangione

While Lucia Frangione is treading the boards in Noël Coward’s Brief Encounter at the Vancouver Playhouse, her 1993 seasonal play about a little radio station that could, Christmas on the Air is warming the hearts (not to mention fingers and toes) of audiences over at the south end of the Granville Street bridge in the basement of the Holy Trinity Anglican Church on 12th Avenue.

You know about radio? That’s television without the pictures. Time was when “steam” radio was our major source of information and home entertainment. Christmas on the Air takes the audience back to the Christmas Eve of 1949 with a nostalgic romp about CKOS (no doubt a play on the word chaos), a fictitious Vancouver radio station and its live radio broadcast in front of a studio audience. The audience even gets to play a small but significant part in the production having to clap on cue when signalled by a station staffer holding up a board that shows the word “APPLAUSE.”

The show is of two hours duration, presented in ‘real time’ and offers a miscellany of Christmas stories, festive songs, weather reports and a few vintage “paid public announcements.”

The pace is geared more towards a hectic radio programme rather than a theatrical play, so the action does, at times, get pretty frenetic. The Christmas ‘special’ is delivered over the airwaves by a corybantic station manager Percival B. Frank (Damon Calderwood) and his amenable wife Yolanda (Lalainia Lindbjerg), the super-glue who holds everything and everyone together amid the maelstrom. They get some help that is never scarce of enthusiasm, but is often lacking in proficiency, from their son Danny (Benjamin Elliot), Sylvia (Seana-Lee Wood), who gives savvy kitchen advice and provides stellar piano accompaniment to “the sweet waves of music” and Kitty McNally (Diana Kaarina), the newest member of this radio family.

The show is in danger of going off the rails when Kitty turns up at the studio with her newborn baby whose existence she, somehow “forget” to mention when she was hired for the programme, nor did she think it worthwhile disclosing it to Danny, who obviously carries a torch for her. Nonetheless, she has little problem revealing her plight to the listeners in a hilarious parody of Tannenbaum (O Christmas Tree).

Despite some inherent confusion, a result of awkward pacing, the outstanding ensemble cast fashion Christmas on the Air into a satisfying mix of poignant humour, madcap physical comedy and great family-friendly fun.