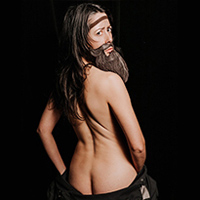 Larry is the kind of fun, androgynous show that Fringe festivals thrive on. Candice Roberts (a.k.a. Candy Bones) is a honest performing artist that works hard to keep her audience engaged. Her one-women show Larry – also the name of the central character – or at least he becomes the central character, when it becomes obvious that the “real performer” hasn’t shown up. Roberts is in character wearing oversized industrial coveralls and involving the audience before the show even starts. It’s Larry’s job to set up the stage before the show, so when (this is really the first gag that runs for the first ten minutes) the performer is a no-show, Larry takes it on himself to stand in. How tough can it be, right? Larry is pretty rough around the edges and very old school about women and their place in the world. He's not a Neanderthal – not quite. In fact he confesses to wanting to measure up to his girlfriend’s expectations. The show takes a left turn when Larry shows us how to meditate. When Roberts daringly doffs her duds for the show, the audience sees what they probably suspected – she is more interesting as a women than a man. Looking around the audience, I couldn’t help but notice that women were in the majority. They also seemed to laugh louder and longer than the men in the audience. Perhaps the reason they found Larry’s flaws so funny it that they identified his behaviour with someone they knew. I couldn’t help but sense though, that as funny as the show is, much of it seemed improvised. 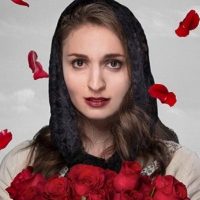 The Russian Play gets full marks for truth in advertising. It’s a forty-minute, Russian romantic tragedy by Canadian playwright Hannah Moscovitch that is set in Stalinist Russia. Believe it or not, this play has been performed at the Shaw Festival. The play weaves a story of Sonya, a sixteen-year-old flower shop girl and Pyotr, a gravedigger who become lovers in a dangerous time. The relationship ends badly – otherwise it wouldn’t be called The Russian Play. When Pyotr suddenly returns to Moscow and Sonya loses her job in the flower shop, Kostya (Nathan Cottell) enters the picture as a malevolent benefactor. If Sonya’s affair of the heart with the gravedigger went sideways, her liaison with Kostya is a disaster. He is typical of the pre- glasnost Russian male, who has powerful connections, so when Sonya rejects him as a lover, he arranges her arrest and internment in a Moscow prison. Bronwyn Henderson is both Sonya and the story narrator, who, though obviously not Russian, gets the accent spot on. Despite the bleak synopsis, she injects plenty of biting satire into her perforfance (at least at the beginning). Dennis Virahilias is excellent in support as Pyotr, while also delivering the show’s original songs. Charlotte Wright wisely allows the actors to set the pacing, though the action sometimes seems a little hurried. The period specific clothing help establish the time and place of nineteen-twenties Russia.

Rob Gee is a former psychiatric nurse from Leicester, England. He is also a former member of Comedy Asylum, a sketch comedy group that garners humour from direct experience from their work in mental health facilities. His show, which is a potent mix of mile-a-minute stand-up comedy and incredibly agile story-telling, takes on the character of Kevin Haggerty, a psychiatric in-patient who has been diagnosed with having delusions of grandeur. Kevin, despite his best efforts to get along and co-operate with his psychotherapist (his shrink) he cannot but help at some point get into a major altercation and wind up getting a mega dose of Xanax. Kevin somehow manages to escape from the hospital, but on his way to the airport to take a flight to Cairo and assume his rightful position as Pharaoh Ramses II, he finds himself at the centre of a myriad of misadventures, including kidnapping a six-year-old girl called Millie. Gee requires no props for his act, save for an uncomfortable looking chair, while immersing himself completely in his characters. You may find it a challenge to keep up, but you will leave the theatre with a smile on your face. 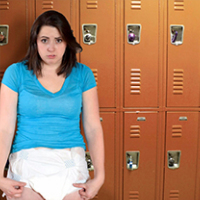 This show had already picked up some positive buzz. This was in evidence at seeing a respectable size crowd at a 5pm Monday performance in the middle of a downpour. Tamlyn Bryson’s one-woman show, co-written with Kyle Kimmerly, starts with her having a two-way conversation with her bladder – as it turns out – her least favourite organ. For some unknown reason she gives her bladder a Bronx accent. Bryson has every reason to be vexed at her nocturnal leaky bladder. It was a bane to her social and school life up to her teenage years. It has to take the blame for not only embarrassment and apprehension over sleep-overs and school camps, but routine visits to the urologist.
Bryson openly discusses the indignities she faced when the problem didn’t just go away on its own. This subject in less capable hands might have had patrons heading to the exit prematurely, but Bryson handles it with precise comic timing. She is an amazing mime artist as displayed in her edifying sequence on surviving a friend’s slumber party. She is also an excellent mimic, who clearly defines her characters with distinct voices and behaviors.
Tamlyn is now in her mid-twenties and no longer considers herself a bedwetter. 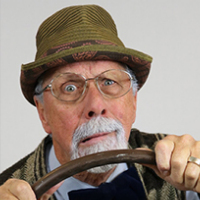 Tom (Tim Bourgard) is a self-confessed old fart. He claims (but I seriously doubt it) to have been born in 1932 – which would make him 86. Certainly, his act, a gallimaufry of amusing anecdotes, hackneyed jokes and songs from another century, depends on the audience’s acceptance of this age. Bourgard as “Old Tom” makes it all seem perfectly natural. When he isn’t sitting down strumming on his eight-string ukulele, he ambles around the stage with the aid of a walking stick (which I’m sure is only a prop).
Family and friends are important to Tom. His entire gambit centres around how he met his late wife Ruby, his grand-daughter who has moved to Toronto and his old chum Doug, who seems to have a problem with his new doctor. Paradoxically, his funniest story relates to when he had his new cell phone stolen, but through some guile manages to get it back.
For an old fart, he can certainly carry a tune. Songs like “Only You,” “Goodnight Irene” and “When I’m sixty-four” entertain some, amuse others. Bourgard likely doesn’t mind how many of his audience fall in the latter. So go pay Old Tom a visit. He’s sure to put a smile on your face, and regardless of how old you are, he’ll convince you that life is worth living. He may even let you play his ukulele. 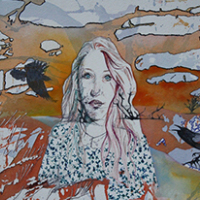 The Legend of White Woman Creek

The Legend of White Woman Creek is a dual character, one woman show that combines theatre and music in the form of a song cycle comprising of about a dozen songs that are similar in melody and structure. Creator Katie Hartman uses the song cycle to drive the narrative of Anna Morgan Faber’s story of suffering on the American frontier in the mid-nineteenth century.
Hartman first comes to the stage as a parapsychologist who, in a soft clear voice summons Anna Morgan Faber, a white woman who lived at the time of the American civil war. She then establishes a spirit circle within which Anna will indwell the ghost-hunter’s body. The ghost-hunter removes her small black dress and slips into a white, ankle length frock. Hartman, now as Anna performs the traditional sounding songs in a pleasant melodic timbre, self accompanied on acoustic guitar.
Starting with “Go Weep, White Woman” Hartman guides the audience through Anna’s loveless marriage with a German settler, before being taken by the Cheyenne in retribution for an attack on their village. Ultimately, she forms a relationship with a member of the tribe and has a son with him. The show has one inherent problem, that is, the show relies entirely on Hartman performance. While her musical talent is indisputable, focusing on the lyrics for the sixty-minute duration of the show becomes a challenge. 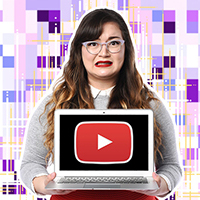 Monica vs. The Internet: Tales of a Social Justice Warrior

Filipina performer and storyteller Monica Ogden certainly propounds an ambitious title to her one woman show. The show’s title may well draw Fringe patrons that might have otherwise given it a miss. It’s also perhaps too overreaching, considering what Ogden actually achieves. Besides frequent trolling pop-up messages flashing across her multi-media screen, there isn’t much direct conflict with the internet itself. While she may refer to herself as “a warrior” she really only rails against racism, relationship abuse and bullying – all valid targets to go after – without demonstrating how she defeated the bellicose forces, or even wrestled them to the ground. Her style of self-deprecating humour and physical comedy draws righteous support from sections of the audience, especially from young women. When her use of multi-media isn’t focused on cyber-bullying, she uses it to throw the spotlight on her family’s touching story. Particularly, that of her mother who left the Philipines as a child and grew up Kapuskasing, Northern Ontario. 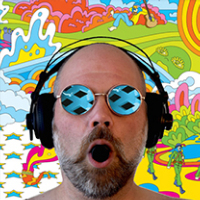 Having already experienced a variety of adaptations of the rock opera Tommy, I couldn’t resist Kevin Armstrong’s solo note-by-note Fringe performance of Pete Townsend’s chef d'oeuvre. Armstrong handles Townsend’s music with a matt black 12-string guitar, loop pedals, and an electronic drum set. The performer has a hefty vocal timbre, though it did show signs of strain from the sixty-minute workout.
The audience gets a choice between watching Armstrong play and sing the iconic score or watching video projected on a large screen blending psychedelic visuals with excerpts of Ken Russell’s 1975 film. I preferred to watch Armstrong. Tommy’s Amazing Journey showcases Armstrong’s musicianship as much as Townsend’s seminal work, released fifty years ago (same year as the Woodstock Festival). The Revue Stage is the ideal venue for this show – which, as you might suspect is more concert than theatre. If you love the music, this show is a must.