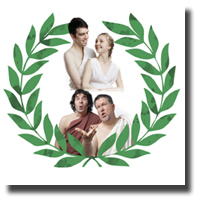 I learned that not only does this musical, which has been dubbed Broadway’s greatest farce, revolve around numerous cases of mistaken identities and spontaneous swapping of roles, but two of Fighting Chance Production’s members also seemed to have swapped roles for the duration of this production. The ridiculously talented Cathy Wilmot, whom you may have seen onstage in recent Fighting Chance productions like “Sweeney Todd” and “Rent”, takes her turn in the director’s chair for “Forum”, demonstrating that she is as equally competent backstage as on it. The show went off without a hitch, and it was obvious the entire company was having a great time performing – flipping, falling, dancing, gyrating, marching, thrusting, and singing their hearts out. The set was impressive, the costumes were a delight, and Dawn Ewen’s choreography was most enjoyable. The constant antics of the Proteans (Morgan Dunne, Cesar Erba and Jameson Treholm) in particular gave the audience plenty to watch.

It was nice to see Fighting Chance’s Artistic director and founder Ryan Mooney take centre stage in the role of Pseudolus – “a role of enormous variety and nuance and played by an actor of such versatility…let me put it this way…” Mooney jokes in the opening scene, “I play the part.” He wasn’t exaggerating.

The real stand-out of the show was the hilarious Cameron Dunster, a recent Capilano University graduate who plays Hero, the naïve and sheltered son of Senex (played by Peter Stainton) who is introduced to love when the lovely Philia (Elyse Maloway) enters his life. Dunster’s physical comedy and befuddled expressions kept the audience in stitches all night, and he had great chemistry with his onstage love-interest. A Funny Thing Happened On The Way To The Forum is one show that never overstays its welcome – intermission seemed to come surprisingly soon, and everyone was disappointed when the show ended.

Opening Night received a well-deserved standing ovation from audience members who couldn’t help belting out the catchy tune Comedy Tonight along with the cast as they took their final bows.