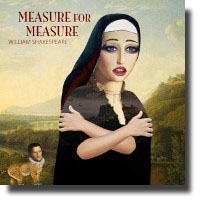 Ah, Shakespeare. It's the one playwright whose performances I always loathe to see and review, even though I have adored countless plays and have much experience in critiquing/analyzing them. Could it be the years in high school and University where it was so frequently mandatory reading that has put me off? Or perhaps because performances usually weigh in around the 3-hour mark, a difficult endeavour for both performer and audience?

Pacific Theatre has a great reputation for producing darker plays with edgier content. It was quite exciting for me that they chose Measure For Measure, which itself is quite thematically dark. Also, it has a much lighter and more comedic tone at times, considering its content, making it one of Shakespeare's problem plays. Thus, lending itself perfectly to Pacific Theatre's modus operandi.

For those of you not familiar: this story is set in Vienna during the Duke's absence, where his interim law enforcer decides to exercise the law against fornication (and other immoralities) as punishable by death.  What comes next tells the story of abuse of power, ambiguous morality, sexual scandal, a terrible ultimatum, and of course, several characters in disguise, including the clever and wise Duke.

This was a guest production by The Honest Fishmongers who did some impressive interpretation and modernization with the play. A few charming details including a clap-on-clap-off lighting set-up infused this performance with many modern and interesting elements. Reminding the audience that, yes, these themes of sexual morality and abuse of power still resonate today. I also appreciate that some of the classic cheesy Shakespearean moments, such as the wedding-proposal/all characters dance clichéd  ending, were treated with much tongue-in-cheek which I hoped was a cue that the happily ever after ending of Measure For Measure is in fact a very deliberately artificial and controversial conclusion.

Ten talented actors playing the role of 22 characters in total made this a very crowded stage indeed. And in the darker scenes, all actors were tasked with having to hold a candle in one hand while nearly flawlessly performing their parts across the board. Particular praise goes to Peter Anderson as the hilarious Lucio/Barnardine, providing great comedic relief and an excellent funnyman counterpart to the more serious Duke, played by the very talented and celebrated Ted Cole. Also a shout out goes to Julie McIsaac, playing the victimized Isabella, and Katharine Venour as Mariana, both of whom produced actual tears on stage -- definitely an impressive skill to deepen the audience's suspension of disbelief.  Other excellent performances included the bawdy Pompey (Emmelia Gordon), who delivered her lines in a very deliberate, nuanced way that I found quite entertaining.

Finally, I cannot forgo mentioning the stage set-up. Sparsely decorated in cardboard chandeliers and four short pillars topped with candles, it gave a bare but practical set. Also noteworthy is that the theatre was set up as theatre in the round, meaning an extra couple of benches were added on either side of the already 2-sided stage where audience members effectively boxed actors into an already cramped stage but providing more intimacy and authenticity for a Shakespearean play.

Well done, to the players of The Honest Fishmongers and Pacific Theatre for presenting another twist on a classic favourite.