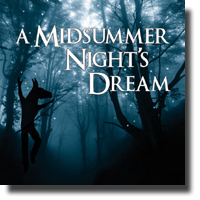 What a fun production! And what a bunch of talented actors! Not only did the audience have fun, but the actors themselves had more fun on opening night. There was a rousing applause at curtain call, and the audience was waiting for them to come back for a second call, but the houselights came up.

There have been many intrpretations of this play, and this one had all the gimmicks of contemporary social media, with cell phones and selfies. But it had the old-fashioned, traditional costumes for the faeries who did their magic on the lovers Hermia (Carly June Friesen), Lysander (Kyle Wipp), Helena (Ally Schuurman) and Demetrius (Matt Veenbass).

Glancing at the bios of these thespians, they are indeed emerging artists in the Vancouver scene. Most of them are graduates from the Theatre Departments of Douglas College in New Westminster, UBC and Capilano University. A lot of laughs came when the troupe of actors Starveling (Chris Fofonoff), Flute (Alex Ross), Snout (Julien Amar), Quince (Julian Legere) and Bottom (Matthew Simmons) did their rendition of Pyramus and Thisbe at the end of the second act.

Before the play started, the faeries Peaseblossom (Heather English), Cobweb (Nina Dosdall), Fawn (Amelia Ross), Moth (Claire Temple), and Mustardseed (Ben Groberman) came to play with the audience. One of them whispered in my ear, "Can you see me?" and another tapped someone on the shoulder, and she almost shrieked out of fright.

Director Matthew Davenport's mise-en-scene was unique, breaking the fourth wall and getting the actors come from all over the theatre. Rose McNeil's set design was gorgeous, evoking the magic of a forest in midsummer. Carly June Friesen's costume design for the Faeries hit the nail on the head.

Kudos to Alchemy Theatre and Vagabond players for a delightful evening. This is a must see production, and despite the fact that we're having temperatures close to the 30s, the air-conditioned theatre will keep you super-cool. So bring a sweater with you.