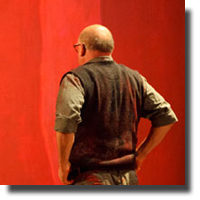 RED is John Logan’s two-handed play about surrealist painter Mark Rothko at a career crossroads. Set in Rothko’s New York studio in what is probably mid twentieth century, its storyline – if indeed there really is one – centres around Rothko’s commission to paint a set of murals for the vanguard Four Seasons restaurant in the Seagram Building.

The play opens with a paint smeared Rothko gazing with vacant contemplation at a painting that only he sees. Enter Ken, who for the next two years will be the artist’s understudy; though Rothko insists from the start that his position will be no more than that of an employee.

Mark Rothko was for sometime regarded as New York’s high priest of abstract expressionism. He was most certainly a self proclaimed merchant of tragedy and Jim Mezon succeeds in bringing out the darker aspects of Rothko’s personality. He hurls cynical condemnation at his contemporaries, though he does show an occasional grudging respect for Jackson Pollack. At the same time he constantly glorifies his own work to anyone who will listen, and Ken has little choice but to listen.

David Coomber as Ken, Rothko’s fictitious assistant with no last name, does more than hold his own against his senior cast-mate. To his credit, Coomber never attempt s to upstage Mezon, who is a natural for the role of the brooding Rothko. In the end, he probably comes out just about even as the naive idealist who is willing to accept his employer’s abuse in order to learn from a master. The younger man’s uneasy relationship with his overbearing pedagogue is defined in the opening scene by Rothko’s refusal of a handshake and in a later scene when Ken brings a sample of his own artwork, but never finds the moment to present it to Rothko for his opinion.

Director Kim Collier is entrusted with the task of bringing visual elements to a play that is essentially dialogue driven. She responds with flair. One of the play’s highpoints has no dialogue at all as the two men find some rare synergy in slapping paint on a large, bare canvas in the colour that provides the play with its title – all to music from Mozart’s The Magic Flute.

Though, perhaps less apropos is the between scenes PowerpointTM presentation of a selection of Andy Warhol’s iconic prints (the Campbell soup can, Coca-Cola bottles etc.).

David Boechler’s mnemonic single set of a 1950s warehouse studio with harshly white-washed brick walls, paint trolleys and floodlights give this production a sense of time and place.

Theatre, local or otherwise doesn’t get much better than this co-production between Vancouver Playhouse, Canadian Stage and The Citadel Theatre. It’s well worth braving the January weather for.