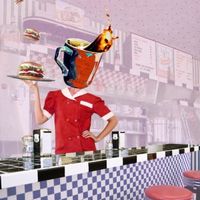 Music and lyrics by James Valcq, lyrics and book by Fred Alley

Pacific Theatre kick-off their 29th season with a musical drama that truly wears its heart on its sleeve. The Spitfire Grill is James Valcq and Fred Alley’s theatrical adaption that has as its core themes redemption and forgiveness. Valcq’s well crafted score is a collection of hybrid pop-inflected folk songs with a distinctive tinge of bluegrass whose lyrics serve to drive the story forward. The entire cast gets an opportunity to sing with varying degrees of confidence; they also double as musicians, carrying their instruments while simultaneously reading their lines.

Percy Talbott (Julie McIssaac) is a young woman with a dream for the future and a nightmare of a past. She arrives in the small (fictional) town of Gilead, Wisconsin looking to make a new start. Her choice for a new hometown seems almost random. A magazine photo showed the place to be colourful in autumn, but when Percy arrives in early winter, the town looks dreary.

Sheriff Joe Sutter (Steven Greenfield, who also takes on the responsibility of musical director) as her parole officer is there to meet her off the bus. He explains that Gilead is now an economically depressed town – “a place for leaving, not for coming to.” But Percy has seen much worse; a recent parolee, she has just served the last five years in the ‘Penn’ and observes in Gilead much of what the locals have stopped seeing.

Nevertheless, with the help of Joe, she finds work at the titular Spitfire Grill, a run-down diner owned and operated by Hannah (Barbara Pollard) a cantankerous widow who also harbours a dark secret. Their relationship doesn’t start well. However, when Hannah falls and breaks her leg, she comes to rely on Percy to manage the diner. When Percy learns that Hannah has been trying to sell the place for the last ten years, she comes up with the idea of conducting a lottery to win the restaurant that would include a pre- entry fee of a hundred bucks that would help Hannah unload it. With the assistance of an unselfish neighbour (Caitriona Murphy), the venture is a huge success and even brings a new ambience to the place – but is Hannah really ready to let it go?

There are a few twists late in the second act: Percy’s revelation of her cataclysmic past and the return of one of the town’s mysterious citizens who wasn’t the war hero that everyone thought, provide an ending that is heart-warming and affecting, if somewhat predictable.

Director Kerry van der Griend makes full use of the venue’s small stage, furnished by Francesca Albertazzi’s detailed diner set. He manages to bring talented individual artists together in a solidly cohesive group. While not all possessing especially powerful voices, they perform with sublime sensitivity.

Perhaps every community needs a Spitfire Grill that serves up generous portions of humour, wisdom and reality.