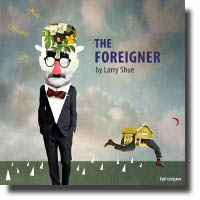 Pacific Theatre opens their thirtieth season with, what is for them, an unlikely production in the form of Larry Shue’s 1984 comedy The Foreigner. Set in Atlanta in the recent past, the catalyst for the play’s deft humour is that the central character, a dull Englishman called Charlie (John Voth) is a clandestine “foreigner.” The term ‘British foreigner’ would seem to some an oxymoron, but Charlie is a timid introvert whose marriage is in the toilet and has no current desire to engage with other people.

Charlie’s “mate” the effusive Froggy (Ryan Scramstad), a fellow Brit who seems to have some unclear role with the U.S. military, checks him into a Tilghman County lodge run by his old friend Betty. Froggy (I hope the nickname isn’t derived from his French name – LeSeuer) fabricates a ruse that Charlie is from a foreign country and neither speaks nor understands English, thus providing the notion that he’ll be left alone.

Far from being left alone, the other dwellers at the lodge are drawn to him. For the motherly Betty (Erla Faye Forsyth) he becomes a coddled member of her household. For Catherine (Kaitlin Williams), who is emotionally lost in a dubious relationship with David (Mack Gordon) sees him as a confidante who will listen attentively to her problems without offering a fix. With Catherine’s intellectually challenged brother Ellard, Charlie pretends to learn English under his enthusiastic tutelage.

Every good comedy, or even a quasi-farce, needs a villain. This is where Owen Musser (Byron Noble) comes in. Owen is a hot-headed redneck who sees Charlie as harmless and feels secure in taunting him. That is, until his language skills improve, then he regards him as a threat.

John Voth is coruscating as the mercurial Charlie, transforming from accidentally funny to physically hilarious. Pacific Theatre season apprentice Ryan Scramstad displays innate stage presence and natural comic timing. Though, it did sound like he fashioned his English accent by doing a lot of listening to Eric Idle (nudge, nudge). Kaitlin Williams shows off her flexibility as Catherine evolving from pessimistic to sanguine.

Evan Frayne is very definitely an actor's director who unifies the comic talents in his cast without completely transcending into inane slapstick. Attempts to give the play an update with current news items might be misplaced and the ‘Star Trek’ styled dialogue could be considered excessive, although, most of the audience did find it amusing.

Lauchlin Johnston must have blown a large chunk of the production budget on his highly detailed set. Perhaps one of the most elaborate seen in this theatre space, it consists of a floor to ceiling fireplace complete with Franklin stove, laminate flooring and a wooden staircase. The set structure and its components brought an extra dimension of quality to an excellent production.