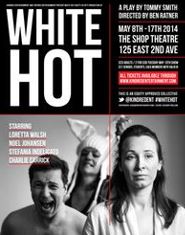 Damn good actors! Damn good play to boot. This fast-paced darkly comedic psycho-drama (done in one hour with no intermission) crams a love triangle between a troubled woman (Loretta Walsh), her opportunistic husband (Noel Johansen) and her trashy sister (Stefani Indelicato). Themes of sexual deviance and social depravity are Playwright Smith's focus in this play, set in New York where he's from.

Indelicato came out strong in the opening scene and maintained that energy all through the play.It looked like she swallowed uppers before the play started, because if she didn't, she's a darned good actor. Walsh, on the other hand, was the more serene character but at the end ,we understand the insanity inside her which finally clamoured, "I can't take it anymore!" Johansen, the pushy husband, played his role to the T, a good-for-nothing pushing his wife to the edge. And then we have a fourth character, the mysterious Ukrainian or Czech, Charlie Carrick, who has his five minutes of fame as he hypnotizes Walsh into a senseless kind of hope.

Mamet, Pinter, Beckett...we see all these influences in Smith's writing. But he adds something of his own which deviates from the Absurdists, and which makes his technique an actor's play. In a situation like this, I assume Director Ben Ratner gave free reign to the actors to go deep into their characters, Stanislavsky style, which influenced the likes of Brando et al., the "reality" or "slice of life" in films like Streetcar Named Desire.

It was a short play, but a powerful one, and it was a full house. I won't be surprised if it sells out in the next four performances.