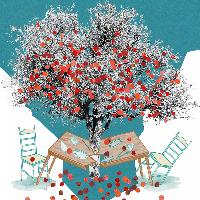 Set in rural Quebec in more or less present time, this translated production of Fanny Britt’s play, initially intended for French language audiences (originally titled Bienveillance), recounts the homecoming of Giles Jean after seventeen years to a mixed reception. The play’s unusual premise follows the protagonist, a lawyer who undergoes a crisis of conscience. His large Montreal law firm is involved in a suit that has Giles leading the case against a former childhood friend whose son Zachary who remains in a coma following an accident.

A large part of the protagonist’s dialogue is delivered as reflective monologue spoken directly to the audience, signaled by abrupt lighting changes (I personally found the lighting changes an unnecessary distraction). Charlie Gallant as Giles uses his proclivity for dark humour to effectively deliver his lengthy asides in what is a considerably physical performance.

Chris Lam is suitably intense without being noticeably over-the-top as Giles complex friend Bruno. Beatrice Zeilinger brings a big personality and a much needed lightness to the play as Giles intrusive, over-protective mother. Stephanie Wong is low key in what is perhaps an intentionally underplayed role as Bruno’s wife Isabelle. Paul Moniz de Sá, the only actor to play dual roles, needed a distinct costume change to differentiate between the loquacious law firm partner and the spectre of the errant family patriarch.

Diane Brown wisely allows the actors to maintain the pace of the play while assuring that the playwright’s Quebecoise sensibility remained intact. John Webber set aptly combines indoor and outdoor elements. The cottage style living room with a small table and four mismatching chairs opposite weeping willows makes full use of a small stage, while mindful of story’s background.

If every play needs a subtext, this one would have to be ”When you love you leave.” Britt’s play explores a capacity for love or self-loathing and for lucidity or deception.