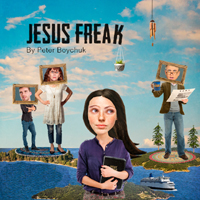 Jesus Freak is a brand new family drama by BC playwright Peter Boychuk that centres on the inter-relational dynamic of a normally progressive leaning family when one of their members does something the others consider untenable. Daughter Clara (Kaitlin Williams) comes home from college and apprehensively announces that she has found religion. As far as Nate (Brandon Bate) her gay brother is concerned, she has gone over to the dark side. Her father Alan (Ron Reed) has always believed that science trumps faith, and sees religion as fine for other folks, not him. He is worried that his daughter may have been brain-washed. Only her mother Susan (Katharine Venour) offers unsure support.

Clara first appears just offstage with an introductory monologue. It’s Christmas in Montreal and she is lonely and vulnerable. She is struggling physically and emotionally with the Quebec winter and culture. The action then moves forward to Easter at the Campbell’s vacation home on Vancouver Island, where the rest of the play is set.

Kaitlin Williams offers a nuanced performance as the conflicted Clara who has to take on some dense dialogue. The somewhat exaggerated title suggests that the protagonist is affiliated with a cult group, which is how her father and brother see even orthodox religion. Ron Reed has arguably the most complex role as Alan Campbell. He is an outright contradiction: he is clearly ant-establishment, yet happily earns his living working for the government, he doesn’t believe in God yet refers to own corner of BC as “the promised land.”

Brandon Bate has the most unsympathetic role as Clara’s belligerent older sibling. Though, he bravely takes on the responsibility without asking favour from the audience. Katharine Venour anchors the play as the perceptive matriarch, bringing sensitivity in the role of a cancer survivor.