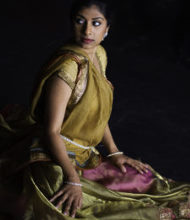 The Cultch
Honour: Confessions of a Mumbai Courtesan written and performed by Dipti Mehta
Presented with Diwali in BC

So, what is the difference between a courtesan and a prostitute anyway? According to Dipti Mehta’s one woman show set in the red-light district of Mumbai (likely Kamathipura, but in essence no longer exists), there is very little difference. Essentially, a prostitute relies on a pimp and doesn’t have much choice in clientele, whereas, a courtesan might be a paramour to just one patron – usually someone of a higher social rank.

Dipti Mehta’s main character Rani – one of seven motley characters – is a teenage soon-to-be courtesan whose “honour” is about to be traded to prospective suitors (read clients). To complicate matters, Rani has fallen in love with someone her own age and class – a no-no for a would be courtesan.

In the telling of her “Confessions,” Rani interacts with: Chameli, Rani’s mother, Laal an esteemed customer, Shyam a pimp, Pandit Rama a quirky priest, Meena a Eunuch of questionable gender, and Draupadi, a character outside the main narrative taken from the Hindu odyssey Mahabharata.

The show actually offers more in presentation than in content. Starting with a lesson in Hindi cuss words (proved to be useful in following the dialogue), Mehta seamlessly and skillfully shifts between characters without any change of costume or staging.

The set is simple yet colourful. A single bed, a chair and clotheslines strewn across the stage carrying silk sheets and sundry clothing items, reminiscent of urban Mumbai neighbourhoods.

Director Mark Cirnigliaro wisely maintains a light touch, allowing for a natural pacing in the hands of the performer. Anyone believing that young Indian women always had to be demure may be aghast at Mehta’s stage persona, however, the show succeeds through her precise comic timing and stage presence.

Despite the provocative title, Dipti Mehta’s one-woman show could hardly be described as dark or pessimistic. While some may find parts of the dialogue less than comfortable, Mehta handles the grim aspects with courage and sensitivity.