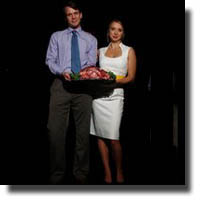 In Peter Sinn Nachtrieb’s Hunter Gatherers, a pair of married couples in their mid-thirties, all close friends and high school alumni, get together for an annual dinner celebration that devolves into a maelstrom of a meal, a strange kind of mid-life crisis. Richard and Pam are hosting, and right from the opening scenes where they prepare to kill the ‘fatted lamb’, you just know something is not quite right here. Wendy arrives laden with wine and lust, but without Tom, who is circling to find just the right parking spot. Pam has a blood spot of her own to worry about on the carpet. Meanwhile, when Tom finally arrives, Richard is not about to spot him an easy time as he wrestles him to the ‘mat’ to ‘see who is the strongest man.’ Fun times await as the festivities proceed.

As the evening winds erratically towards mealtime, it becomes apparent that these two mismatched couples are not only arrested adolescents, but maybe even throwbacks to a more basic instinctual era: one where Tom’s intellectualism is at odds with Richard’s ‘survival of the fittest’ ethos. The question becomes not so much who is the fittest, but rather who can survive the evening. Richard gives his proclivities for violence full reign in what an analyst might see as overcompensation for underachievement. Before long, all four characters are fighting a losing battle to control their climactic libidos. All the while, this play’s narrative ark veers from one roiling flood of a physical foray to sizzling psychological sidebar after sidebar, propelling the plot precipitously beyond promiscuity towards its famously frenetic finale atop a strange and isolated Mount Ararat of elegant artful endurance.

This satiric saga has all of the blood, sweat and torn-curtain drama one could want in a macabre, swinging (not just the moods either) post-modern tale of torrid tempestuous meal-time mayhem. Short bursts of staccato dialogue do not disappoint, but rather intensify the climactic effect; characterization is as compelling as the conflict; and the imagery has an immediate force that impels the audience towards the impending realization that nothing will ever be quite the same as it once was. The big question is whether this sea-change sizzler of a script is adequately portrayed in the Staircase Theatre production.

It was November 1, the night after Halloween, and the Drive was still awash with costumes, but in the Havana that night, there was no disguising the outrageous talent on stage. Not only do Mackie, Carlone, Clift, and Renzetti nail their respective portrayals stake-like so to speak into the heaving body of a script, they also drive that stake straight through the beating heart of this undead dazzler of a performance. And when I say, they kill it, I mean that in the best possible connotation of that ‘slay me sucker, I’m breathing too heavy’ subtext. A few elaborations will suffice.

Maryanne Renzetti’s Wendy invests every scene she shares with Jay Clift’s Richard with her signature ‘ravish me big boy, because I want to bear your babies’ kind of sensuality, and by contrast her disdain for Peter Carlone’s Tom is at first barely concealed, and later it becomes blatant contempt. Renzetti does a masterful job of registering the subtleties of her character’s nuanced emotions both facially and vocally, masking and enmeshing innuendo through her libidinous metaphor-laden dialogue with husky, sultry and sometimes downright steamy tones.

Both Jay Clift and Peter Carlone inhabit their parts with abandon. Well, Clift’s Richard is admittedly the most abandoned of them all, but in this day and age, the rough sex scenes may seem tame to some. Clift himself admits being a physical actor, which goes a long way to explaining how right he is for this role. His early scenes with Pippa Mackie’s buttoned-down Pam shows both these actors’ barely contained intensity—a kind of rabid physicality that comes out wildly much later in the play.

Pippa Mackie’s great restraint is perhaps most evident in the opening scenes, as she builds her portrayal of Pam line by line, beat by straight-laced beat into a modern marvel of restrained moderation, until the audience knows surely something is going to blow. When it does, Mackie delivers in bombshell fashion. Finally, Ms. Mackie abandons all decorum; while Peter Carlone’s final scene with her is perhaps the only false note in the play, because—without giving too much away—let’s just say he could have put up more of a fight as Pam came into her own fine frenzy, a wild high point many in the audience may feel Mackie could not have faked… with more consummate abandon.

Although Hunter Gatherers is not for the squeamish, if you like a strong cast portrayal in a black comedy laugh riot of a production straight up with a double-dose chaser of sex and violence, then the Staircase Theatre hunter gatherers will take you there every time. Just don’t say you weren’t warned. This show should be rated RR, for Ridiculously Raunchy.