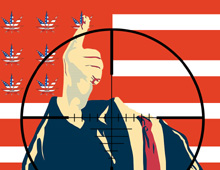 As its provocative title would suggest, Kill All Politicians is a political satire. The good news is that no politicians were harmed during the performance.

At around seventy minutes run time on a single set, Thomas Yungerberg’s one act play certainly has the look and feel of a superior Fringe production – in fact, the playwright wrote it expressly for the Hollywood Fringe Festival.

Stu (Brad Bergeron) is the self-imposed black sheep in his middle-class family and carries a huge chip on his slender shoulder. He doesn’t feel the need to change the world as much as he wants the world to be changed – preferably by others. He has strong political ideas but doesn’t bother to vote.

When he receives a parking ticket because his space was taken up by a neighbour’s truck, it serves as a flashpoint for his pent-up anger and frustration at the system that he has always abhorred.

He concludes that the solution is to “kill all politicians” and enlists the help of his roommate Ben (Carson Bokenfohr) and his neighbours in preparing a manifesto about his plan – regardless of how futile the notion seems to them. It doesn’t help matters he takes a bong hit with his buddy’s water pipe, then snorts coke with off-the-wall neighbour Glenn. Far from providing a calming influence it adds fuel to an already inflammatory situation.

The play’s two protagonists are unwilling participants in the American chaotic political order where young people don’t quite know where things are headed. Yungerberg’s dialogue is at times edgy, other times outrageous and almost always smartly cynical.

With frequent use of drug paraphernalia and colourful language, Kill All Politicians is a long way from being a family show. Nonetheless, this talented young cast make the play’s dark humour relevant and put the current political climate in proper perspective.