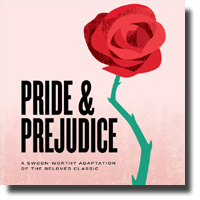 Pride and Prejudice by Janet Munsil, based on the novel by Jane Austen

Pride and Prejudice reflects the age-old bias of society-- the feeling of superiority merely as a result of being born in the rich and noble class.  Set in England in the early 19th century, it tells the story of Mr. and Mrs. Bennet's five unmarried daughters after the arrival of the rich, eligible bachelor Mr. Bingley and his status-conscious friend, Mr. Darcy, into their neighbourhood.  While Bingley takes an immediate liking to the eldest Bennet daughter, Jane, (played well with poignant reserve by Kaitlin Williams) Darcy has much prejudice in accepting this local society and shows his disdain.  He argues repeatedly with the second-eldest Bennet daughter, Elizabeth.

The invisible norms that build barriers between the classes and the subtle steps that may assist these to break, are reflected in the actions of the main characters.  The story is told through great acting, beautiful costumes and props that characterize Edwardian times.

Naomi Wright as Elizabeth Bennet plays her role perfectly as the proud, intelligent second daughter who has the audacity to feel pride and respect for her own family even though she belongs to the lower gentry.  She is well matched to confront the “arrogant and superior nobility” of the upper class in the personality of Darcy.  Eric Craig as the tall, handsome, rich Mr. Darcy plays his role impeccably as the aloof, reserved male protagonist.

The other actors all contribute to the play with zest and humour. The prudish and restrictive beliefs of that era are delivered with much wit and satire.  Mrs. Bennet with her focus in finding suitable husbands for her daughters, her fear of being left destitute (as girls couldn't inherit their father's estate) is full of stress and the use of her “nerves” as an escape from reality is played with skill and drama by Katey Wright.  Mr. Collins (Scott Bellis, adds much talented hilarity) acts his part as the 'high-assuming' suitor who none of the Bennet daughters want to marry.  The two youngest of the Bennet girls (Kyla Deorkson and Raylene Harwood do a fine portrayal) with their giddy giggles and immature behaviour provide a good contrast to the older, sober sisters.            .

The set which is simple yet beautiful include the enormous chandelier and large white windows brought down from the ceiling at appropriate times, reminding one of the days of old.  The first scenes are slow-moving and though the Set Designer Alison Green and the Costume Designer Christine Reimer show an excellent ability to reflect the colourful scenes and glamorous clothes of that era, it's easy to let your mind wander.  However, in a short while the pace increases and after the intermission the play keeps you enthralled through the scenes till the climax which ends a bit too abruptly.

Munsil is able to capture Jane Austen's satire and wit.  Sarah Rodgers' production has many comic episodes that make the story more relevant to our times and also makes the more elaborate language of Edwardian times easier to follow.  The play is a good portrayal of Austen's novel and should please the “Janeites”.   A 'Janeite' friend reflected that Lady Catherine de Bourgh (talented Mrs.Shirley Broderick acted marvellously well with “genuine, aristocratic arrogance”) was the one that convinced Darcy to return to make a second marriage proposal to Elizabeth, because the latter had told Lady Catherine she would not promise “not to marry Darcy”.  Lady Catherine had conveyed this message to Darcy.  This is a small detail missed in the the Arts Club version of the play but which true 'Janeites' notice.

Overall, the play is well-acted and reflects the prejudices and pride of the classes.  Only through a “meeting of the minds” can such snobbery be dissolved.  Though the hero and heroine, both work hard at shutting themselves from their feelings, true romance finally overcomes many odds.  The journey of these two intelligent, strong-willed personalities is beautifully conveyed through thoughtful dialogue, wit, music and style.  It's well worth seeing this classic production.