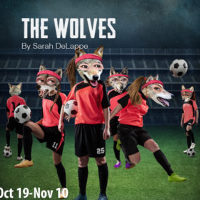 The first thing one pays attention to when entering the small Pacific Theatre is what is missing. No set, no props, just a black box with the entire stage floor covered with artificial turf (actually, it’s green outdoor/indoor carpet but it does the job). In this With a Spoon and Rumble Theatre production of Sarah DeLappe’s ensemble sports drama The Wolves, nine girls are members of a soccer team. Since it typically takes eleven players to make up a regular squad, we can immediately deduce that this team plays seven-a-side indoor soccer.

The ‘girls’ show up for training sessions in full kit – blue jerseys, black shorts and varied styles of soccer shoes (think Uruguay national team). All are of high school senior age and are generally identified by their assigned team number. Like many girl’s sport teams there is a lot of aimless chatter as they are put through their paces on the training ground (okay, that’s probably not fair – boys chatter too).

Much of the chatter is good-natured banter between players who have known one another for a long time. However, conversations occasionally get tense with individuals offering contrasting opinions on such things as Khmer Rouge atrocities and their the male coach’s commitment – or rather lack of it.

For the actors the play is physically demanding. They must maintain a fairly high level of activity, while simultaneously interacting on a verbal plane. While the play is a real ensemble piece with actors sharing roughly equal responsibility for the show’s success, Anjela Magpantay acquitted herself admirably as a late replacement for Amanda Sum as player #2 – I hope Ms. Sum didn’t get injured playing soccer. Paige Louter stood out with a quirky, out of kilter performance as #46, the homeschooled girl who couldn’t quite fit in.

Director Jamie King’s prior knowledge of The Wolves certainly showed in the play’s consciousness. Although, I personally found that in some areas there is too much disclosure about incidental aspects, yet not enough information provided in terms of the individual player’s idiosyncrasies. For instance, what was behind what seemed like the goalkeeper’s (Kim Larson) anxiety attack? There was also the unexplained conflict between two former friends, striker #7 (Danielle Klaudt) and defender #14 (Montserrat Videla) who even shared the same original way of wearing their soccer strip.

Like many stories that use sport as a metaphor for basic human endeavour, The wolves (the team, not the play) show us that a team of diverse personalities can move forward in the spirit of togetherness for the collective good.